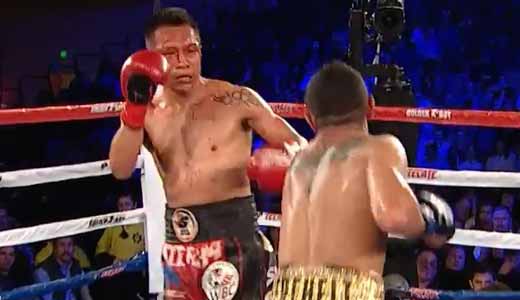 Review by AllTheBestFights.com: 2017-01-28, very tough fight with some wild exchanges and a tremendous pace: Francisco Vargas vs Miguel Berchelt is one of the best boxing fights of 2017 and it gets four stars!

The undefeated Francisco Vargas entered this fight with a boxing record of 23-0-2 (17 knockouts) and he is ranked as the No.2 super featherweight in the world (currently the #1 in this division is Vasyl Lomachenko). He won the Wbc super-Fw belt in 2015, against Takashi Miura (The Ring magazine Fight of the Year 2015, Miura vs Vargas) but then he drew with Orlando Salido in 2016 (5-stars fight, Vargas vs Salido).
His opponent, Miguel Berchelt, has an official record of 30-1-0 (27 KOs=90%) and he entered as the No.15 in the same weight class. He suffered his only loss when he faced Luis Eduardo Florez in 2014, since then he has won nine consecutive bouts beating George Jupp (=Berchelt vs Jupp) and Chonlatarn Piriyapinyo in 2016 (=Berchelt vs Piriyapinyo). ‘El Bandido’ Francisco Vargas vs Miguel Berchelt is valid for the WBC World super featherweight title (Vargas’ second defense); they also faced each other a second time on May 11, 2019 (Miguel Berchelt vs Francisco Vargas 2). Watch the video and rate this fight!