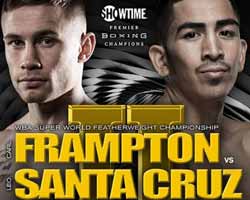 Review by AllTheBestFights.com: 2017-01-28, great performance by both boxers: Carl Frampton vs Leo Santa Cruz 2 is close to get four stars!

The undefeated world champion in two different weight classes Carl Frampton entered this fight with a perfect record of 23-0-0 (14 knockouts) and he is ranked as the No.1 featherweight in the world while his opponent, the former world champion in three different weight classes Leo Santa Cruz, has an official boxing record of 32-1-1 (18 knockouts) and he entered as the No.2 in the same weight class. In their previous fight Frampton defeated Leo Santa Cruz via majority decision (=Santa Cruz vs Frampton I); before this bout Carl had beat Scott Quigg (=Frampton vs Quigg) while Santa Cruz had won over Kiko Martinez (Fight of the Year 2016 candidate, Santa Cruz vs Martinez). Leo Santa Cruz vs Carl Frampton 2 is valid for the WBA and WBC Diamond featherweight titles. Watch the video and rate this fight!

Their previous fight: Leo Santa Cruz vs Carl Frampton I