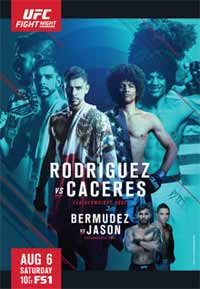 Review by AllTheBestFights.com: 2016-08-06, fight not particularly good between Dennis Bermudez and Rony Mariano Bezerra: it gets two stars.

Dennis Bermudez entered this fight with a pro mma record of 15-5-0 (47% finishing rate) and he is ranked as the No.17 featherweight in the world. He lost two consecutive bouts between 2014 and 2015, against Ricardo Lamas (=Bermudez vs Lamas) and Jeremy Stephens (=Bermudez vs Stephens) but he came back to win in 2016 beating Tatsuya Kawajiri (=Kawajiri vs Bermudez).
His opponent, the black belt in Brazilian jiu-jitsu and Tuf Brazil tournament winner Rony ‘Jason’ Mariano Bezerra, has a record of 14-5-0 (93% finishing rate) and he entered as the No.68 in the same weight class but he comes off a no-contest against Damon Jackson (Jason won the bout via submission but then he tested positive for banned diuretic and the result was overturned in a no-contest). Bermudez vs Jason is on the undercard of Yair Rodriguez vs Alex Caceres – UFC Fight Night 92. Watch the video and rate this fight!