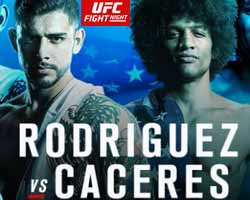 Review by AllTheBestFights.com: 2016-08-06, some good single shots between Yair Rodriguez and Alex Caceres but it is not enough to get three stars: it gets two (UFC Fight of the Night).

The black belt in tae-kwon-do and Tuf Latin America tournament winner Yair Rodriguez entered this fight with a professional mma record of 8-1-0 (50% finishing rate) and he is ranked as the No.29 featherweight in the world. ‘Pantera’ Rodriguez suffered his only loss when he faced Luis Roberto Herrera in 2012, since then he has won five consecutive bouts beating Andre Fili in 2016 (4-stars fight, Fili vs Rodriguez).
His opponent, Alex Caceres, has an official record of 12-8-0 (58% finishing rate) and he entered as the No.73 in the same weight class. ‘Bruce Leeroy’ Caceres lost three consecutive fights between 2014 and 2015, the last one against Francisco Rivera (=Rivera vs Caceres), but then he has won over Masio Fullen and Cole Miller. Rodriguez vs Caceres is the main event of the UFC Fight Night 92. Watch the video and rate this fight!