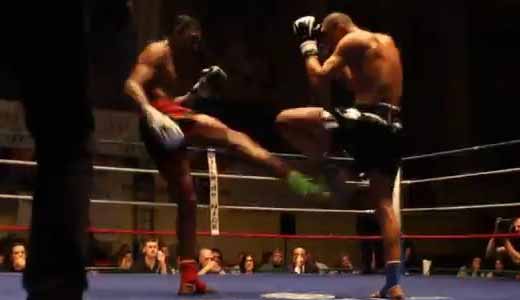 Review by AllTheBestFights.com: 2015-03-07, close and very tough battle thanks to a great performance by both fighters: Johny Tancray vs Christian Zahe was one of the best kickboxing fights of the year 2015 and it gets four stars!

The former WFKB and MTA world champion Johny Tancray (red and black shorts) entered this fight with a kickboxing record of 53-9-3 (22 knockouts) and he fought fighters like Giorgio Petrosyan, Kaopon Lek and Enriko Gogokhia in his professional career.
His opponent, Christian Zahe, had an official record of 26-7-7 and he won the WKN world welterweight belt in his previous bout against Daniel Zahra. Tancray vs Zahe was valid for the ISKA Intercontinental welterweight title and it was the co-main event of “Nice Fight Night” (the main bout was Aydin Tuncay vs Paolo Barbanti). Watch the video and rate this fight!