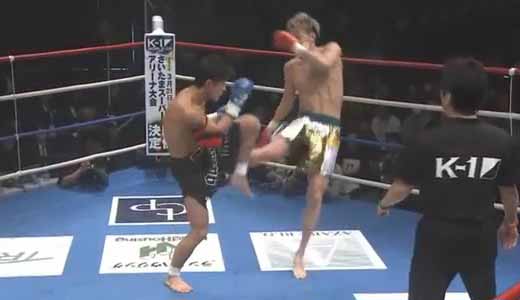 Review by AllTheBestFights.com: 2017-02-25, spectacular finish between Hiroshi Mizumachi and Rukiya Anpo: this is one of the best kickboxing fights of 2017 and it gets four stars!

Hiroshi Mizumachi (black trunks) entered this fight with a professional kickboxing record of 19-12-3 (8 knockouts) while his opponent, the 21-year-old Rukiya Anpo (16 years younger than Mizumachi), has an official record of 8-3-0 (4 knockouts). Hiroshi Mizumachi vs Rukiya Anpo is the reserve fight of the K-1 lightweight championship tournament (won by Wei Rui, who beat Ren Hiramoto in the final) and it is on the undercard of Taiga vs Urabe Hirotaka – K-1 World GP 2017 Japan. Watch the video and rate this fight!