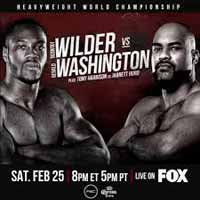 Review by AllTheBestFights.com: 2017-02-25, fight not so exciting between Deontay Wilder and Gerald Washington: it gets two stars.

Both undefeated, the Wbc Hw champion Deontay Wilder entered this fight with a perfect record of 37-0-0 (36 KOs=97%) and he is ranked as the No.2 heavyweight in the world (currently the #1 in this division is Anthony Joshua) while his opponent, Gerald Washington, has a boxing record of 18-0-1 (12 knockouts) and he entered as the No.20 in the same weight class. Both boxers fought twice last year: Wilder beat Artur Szpilka (=Wilder vs Szpilka) and Chris Arreola (=Wilder vs Arreola) while Washington won over Eddie Chambers and Ray Austin. Deontay Wilder vs Gerald Washington is valid for the WBC World heavyweight title (Wilder’s fifth defense). Watch the video and rate this fight!