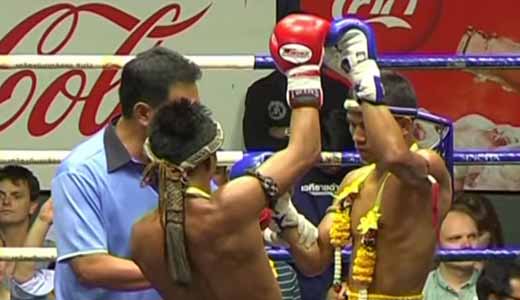 Saeksan Or Kwanmuang (also known as Seksan – เสกสรร อ.ขวัญเมือง) entered this fight with a professional kickboxing record of 163-26-3 and he is ranked as the No.5 super featherweight in the world while his opponent, Thanonchai Tor Sangtiennoi (red trunks – ธนญชัย ท.แสงเทียนน้อย), entered as the No.2 featherweight but unfortunately we don’t know his record. In their first fight Thanonchai defeated Saeksan on points (on February 12, 2015); this second bout was the main event at the Rajadamnern Boxing Stadium (Bangkok, Thailand). Watch the video and rate this fight!