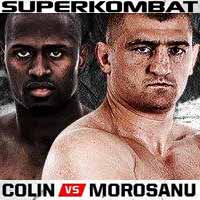 Catalin Morosanu entered this fight with a professional kickboxing record of 39-8-0 (23 knockouts) and he is ranked as the No.7 heavyweight in the world while his opponent, Colin George, has a record of 15-7-0 (14 KOs=93%) and he comes off the loss with Jerome Le Banner in 2014 (=Le Banner vs George). Also Morosanu suffered his last defeat last year when he faced Tomas Hron, but then he came back to win beating Giannis Stoforidis (=Morosanu vs Stoforidis) and Brian Douwes (=Morosanu vs Douwes). Morosanu vs George is the main event of “SuperKombat World Grand Prix III 2015”. Watch the video and rate this fight!