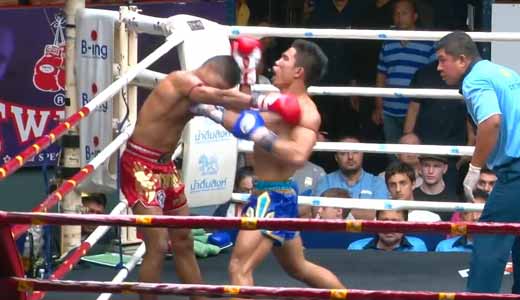 Review by AllTheBestFights.com: 2016-09-14, exciting and really tough fight with some tremendous exchanges and probably the best muay thai round of the year so far: even if we have not found and rated the first and second rounds, Petchartchai Chaoraiooy vs Suriyan PKSaenchaimuaythaigym is one of the best muay thai fights of 2016 and it gets four stars!

Unfortunately we don’t know the muay thai record of both fighters but Petchartchai Chaoraiooy (red shorts) is ranked as the No.10 bantamweight in the world while his opponent, Suriyan PKSaenchaimuaythaigym (also known as Suriyanlek Or.Bor.Tor.Kampi), entered as the No.7 in the same weight class. In their first fight Petchartchai beat Suriyan via decision (July 7, 2016); this second bout is on the undercard of Sangmanee vs Thanonchai – Onesongchai Promotion at Rajadamnern Stadium. Watch the video and rate this fight!