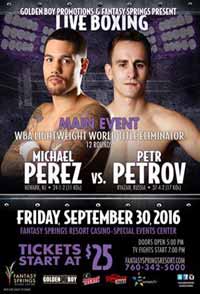 Review by AllTheBestFights.com: 2016-09-30, nice and tough fight between Michael Perez and Petr Petrov: it gets three stars.

Petr Petrov entered this fight with a pro boxing record of 37-4-2 (18 knockouts) and he is ranked as the No.10 lightweight in the world (currently the #1 in this division is Rances Barthelemy). He suffered his last defeat when he faced Dejan Zlaticanin in 2016, after this bout he has won five consecutive fights beating Marvin Quintero in his last one (=Quintero vs Petrov).
His opponent, Michael Perez, has a record of 24-1-2 (11 knockouts) and he entered as the No.37 in the same weight class. His only loss occurred in 2012, against Omar Figueroa Jr (=Figueroa vs Perez), since then he has collected nine wins and one draw defeating Martin Honorio in 2016. Petrov vs Perez is the main event of the evening. Watch the video and rate this fight!