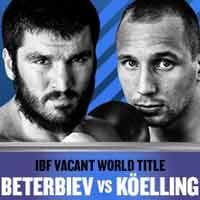 Review by AllTheBestFights.com: 2017-11-11, disappointing fight between Artur Beterbiev and Enrico Koelling: it gets two stars.

The undefeated 2009 World amateur champion Artur Beterbiev entered this fight with a perfect boxing record of 11-0-0 (11 KOs=100%) and he is ranked as the No.9 light heavyweight in the world (currently the #1 in this division is Adonis Stevenson). He fought twice last year winning over Ezequiel Osvaldo Maderna (=Beterbiev vs Maderna) and Isidro Ranoni Prieto (=Beterbiev vs Prieto).
His opponent, Enrico Koelling, has an official record of 23-1-0 (6 knockouts) and he entered as the No.19 in the same weight class. He suffered his only loss when he faced Mirco Ricci in 2015 (=Koelling vs Ricci), since then he has won seven consecutive fights defeating Ryno Liebenberg in his last two (=Koelling vs Liebenberg I). Beterbiev vs Koelling is valid for the vacant IBF World light heavyweight title; undercard of Jose Carlos Ramirez vs Mike Reed. Watch the video and rate this fight!