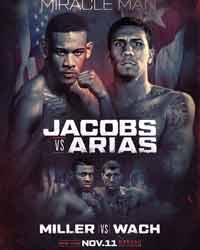 Review by AllTheBestFights.com: 2017-11-11, fight not so exciting between Jarrell Miller and Mariusz Wach: it gets two stars.

The undefeated Jarrell Miller entered this fight with a professional boxing record of 19-0-1 (17 KOS=89%) and he is ranked as the No.12 heavyweight in the world. The only man who stopped him in a draw was Joey Dawejko in 2013, since then ‘Big Baby’ Miller has collected 15 consecutive victories beating Fred Kassi (=Miller vs Kassi) and Gerald Washington in his last two (=Miller vs Washington).
His opponent, Mariusz Wach, has an official record of 33-2-0 (17 knockouts) and he entered as the No.20 in the same weight class. He lost to Alexander Povetkin in 2015 (=Povetkin vs Wach) but then he has beat Marcelo Luiz Nascimento and Erkan Teper (=Teper vs Wach). Miller vs Wach is on the undercard of Daniel Jacobs vs Luis Arias. Watch the video and rate this fight!