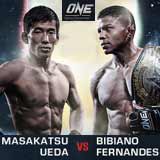 Review: 2014-05-02, fight not particularly good: Bibiano Fernandes vs Masakatsu Ueda gets two stars. The balck belt in bjj Bibiano Fernandes entered this fight with a professional mma record of 15-3-0 (40% finishing rate, with only one tko victory) and he is ranked as the No.4 bantamweight in the world, he suffered his last defeat in 2010 when he faced Hiroyuki Takaya losing the DREAM Fw title, since then he has collected seven consecutive wins and last year he won the One Fc Bw belt.
His opponent, Masakatsu Ueda, has an official record of 18-2-2 (33% finishing rate) and he entered as the No.33 in the same weight class, he suffered his last defeat in 2012 when he faced Travis Marx in his Bellator debut (=Marx vs Ueda), after that bout he has fought and won three times and in 2013 he won the ONE FC Bw Grand Prix defeating Kevin Belingon in the final (=Ueda vs Belingon). Fernandes vs Ueda, main event of One Fc 15, is valid for the ONE FC bantamweight title. Watch the video and rate this fight!