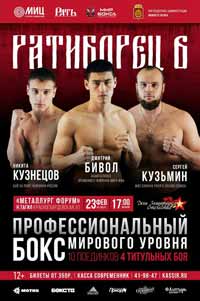 Review by AllTheBestFights.com: 2017-02-23, fight not so exciting between Dmitry Bivol and Robert Berridge: it gets two stars.

The undefeated Dmitry Bivol entered this fight with a perfect boxing record of 8-0-0 (6 KOs=75%) and he is ranked as the No.30 light heavyweight in the world. He fought three times last year winning over Cleiton Conceicao, Felix Valera (=Bivol vs Valera) and Yevgeni Makhteienko.
His opponent, Robert Berridge, has an official record of 29-5-1 (21 knockouts) and he entered as the No.59 in the same weight class. He lost two consecutive bouts between 2015 and 2016, against Reece Papuni and Eleider Alvarez (=Alvarez vs Berridge) but then he has beat Sam Rapira and Adrian Talhia. Dmitry Bivol vs Robert Berridge is valid for the interim WBA World light heavyweight title. Watch the video and rate this fight!