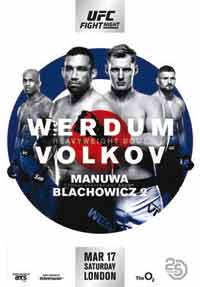 Review by AllTheBestFights.com: 2018-03-17, some good exchanges between Jimi Manuwa and Jan Blachowicz 2 but it is not enough to get three stars: it gets two (UFC Fight of the Night).

Jimi Manuwa entered this fight with a pro mma record of 17-3-0 (94% finishing rate) and he is ranked as the No.12 light heavyweight in the world but he comes off the loss against Volkan Oezdemir (Jimi Manuwa vs Volkan Oezdemir). Before this bout he had beat Corey Anderson in 2017 (Manuwa vs Anderson) and Ovince Saint Preux in 2016 (St Preux vs Manuwa).
His opponent, the black belt in Bjj and former Ksw light-Hw champion Jan Blachowicz, has a record of 21-7-0 (62% finishing rate) and he entered as the No.25 in the same weight class. He suffered two consecutive defeats between 2016 and 2017, against Alexander Gustafsson (Gustafsson vs Blachowicz) and Patrick Cummins, but then he has beat Devin Clark (Jan Blachowicz vs Devin Clark) and Jared Cannonier. In their first fight Manuwa had defeated Blachowicz via unanimous decision (April 11, 2015 – Jan Blachowicz vs Jimi Manuwa I); this second bout is on the undercard of Fabricio Werdum vs Alexander Volkov – UFC Fight Night 127. Watch the video and rate this fight!

(Free embeddable video hosted on Youtube and not uploaded by AllTheBestFights)
https://www.youtube.com/watch?v=0iJdRqnhe8A