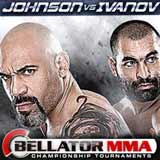 Review: 2014-04-11, great fight between Lavar Johnson and Blagoi Ivanov: it gets three stars. Lavar Johnson entered this fight with a professional mma record of 18-8-0 (100% finishing rate) and he is ranked as the No.35 heavyweight in the world, he is 36 years (nine years older than Ivanov) and in 2013 he fought and lost twice: against Brendan Schaub (his last bout in the Ufc) and Vinicius Queiroz (his Bellator debut, Johnson vs Queiroz); Johnson came back to victory in 2014 defeating Ryan Martinez by tko in the first round (=Martinez vs Johnson).
His opponent, the undefeated Blagoi Ivanov, has a perfect record of 10-0-0 (80% finishing rate) and he entered as the No.38 in the same weight class, he won the World Sambo Championships in 2008 (defeating Fedor Emelianenko in the semifinal!!) and this year he has already fought and won once against Rich Hale. Johnson vs Ivanov, main event of Bellator 116, is the semifinal of the Bellator heavyweight tournament. Watch the video and rate this fight!