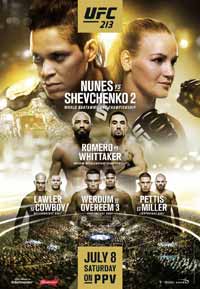 Review by AllTheBestFights.com: 2017-07-08, fight not particularly good between Daniel Omielanczuk and Curtis Blaydes: it gets two stars.

Daniel Omielanczuk entered this fight with a mma record of 19-7-1 (63% finishing rate) and he is ranked as the No.35 heavyweight in the world but he comes off two consecutive defeats, against Stefan Struve (=Struve vs Omielanczuk) and Timothy Johnson.
His opponent, Curtis Blaydes, has an official record of 7-1-0 (100% ko/tko victory rate – he has never won via submission) and he entered as the No.54 in the same weight class. He suffered his only loss when he faced Francis Ngannou last year, after this fight he has won over Cody East and Adam Milstead (then overturned in a no-contest beacause he tested positive for marijuana). Curtis Blaydes vs Daniel Omielanczuk is on the undercard of Yoel Romero vs Robert Whittaker – UFC 213. Watch the video and rate this fight!