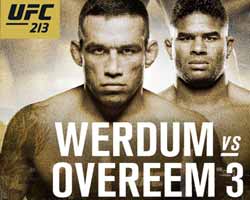 Review by AllTheBestFights.com: 2017-07-08, disappointing fight between Fabricio Werdum and Alistair Overeem 3: it gets two stars.

The black belt in judo, Brazilian jiu-jitsu and former Ufc Hw champion Fabricio Werdum entered this fight with a professional record of 21-6-0 (76% finishing rate) and he is ranked as the No.2 heavyweight in the world. He fought twice last year losing the Ufc belt against current #1 Stipe Miocic (=Werdum vs Miocic) but then he has beat Travis Browne (=Werdum vs Browne 2).
His opponent, the former K-1, Strikeforce and Dream world champion Alistair Overeem, has a mma record of 42-15-0 (90% finishing rate) and he entered as the No.3 in the same weight class. He also lost to Stipe Miocic in 2016 (=Miocic vs Overeem) but he came back to win in 2017 against Mark Hunt (=Overeem vs Hunt 2). In their previous fights Overeem had beat Werdum in 2006 while, five years later, ‘Vai Cavalo’ took revenge on “The Reem” (=Overeem vs Werdum II). Alistair Overeem vs Fabricio Werdum 3 is on the undercard of Yoel Romero vs Robert Whittaker – UFC 213. Watch the video and rate this fight!