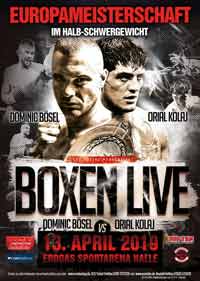 Review by AllTheBestFights.com: 2019-04-13, pretty good finish but the rest of the fight was not so exciting: Dominic Boesel vs Timy Shala 2 gets two stars.

Dominic Boesel entered this fight with a boxing record of 28-1-0 (10 knockouts) and he is ranked as the No.16 light heavyweight in the world. He lost to Karo Murat in 2017 (Dominic Boesel vs Karo Murat), but then he has won four bouts beating Serhiy Demchenko (Dominic Boesel vs Serhiy Demchenko) and Enrico Koelling in 2018.
His opponent, Timy Shala (who replaces Orial Kolaj), has an official record of 23-2-1 (9 knockouts) and he entered as the No.45 in the same weight class. He lost to Erik Skoglund in 2016 but then he has beat Chimwemwe Chiotcha and Gabor Detre. In their first bout Boesel had defeated Shala via unanimous decision (March 3, 2015 Dominic Boesel vs Timy Shala I; this second fight is valid for the EBU European light heavyweight title. Watch the video and rate this fight!