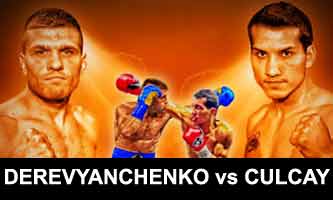 Review by AllTheBestFights.com: 2019-04-13, close and tough fight between Sergiy Derevyanchenko and Jack Culcay: it gets three stars.

The former Olympian Sergiy Derevyanchenko entered this fight with a professional boxing record of 12-1-0 (10 KOs=83%) and he is ranked as the No.8 middleweight in the world (currently the #1 in this division is Saul ‘Canelo’ Alvarez) but he comes off his first loss, suffered against Daniel Jacobs in October (Daniel Jacobs vs Sergiy Derevyanchenko); before this bout, in March, he had defeated Dashon Johnson.
His opponent, the former Olympian and former Wba light-Mw champion Jack Culcay, has a record of 25-3-0 (13 knockouts) and he entered as the No.12 in the same weight class. He suffered two consecutive defeats in 2017, with Demetrius Andrade (via split decision, Andrade vs Culcay) and Maciej Sulecki (Maciej Sulecki vs Jack Culcay), but then he won three bouts in 2018 defeating Rafael Bejaran in his last one (Jack Culcay vs Rafael Bejaran). Derevyanchenko vs Culcay is on the undercard of Peter Quillin vs Caleb Truax. Watch the video and rate this fight!