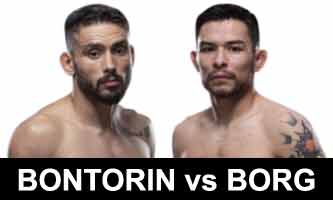 Review by AllTheBestFights.com: 2020-02-15, disappointing fight between Ray Borg and Rogerio Bontorin: it gets two stars.

Ray Borg entered this fight with a mma record of 12-4-0 (58% finishing rate) and he is ranked as the No.9 flyweight in the world (currently the #1 in this division is Joseph Benavidez). He lost two consecutive bouts between 2017 and 2019, against Demetrious Johnson (Demetrious Johnson vs Ray Borg) and Casey Kenney, but then he has beat Gabriel Silva.
His opponent, Rogerio Bontorin, has an official record of 16-1-0 (87% finishing rate) and he entered as the No.15 in the same weight class. He suffered his only loss when he faced Michinori Tanaka in 2017, since then he has won four bouts defeating Magomed Bibulatov and Raulian Paiva in 2019. Borg vs Bontorin is on the undercard of Corey Anderson vs Jan Blachowicz 2 – UFC Fight Night 167. Watch the video and rate this fight!