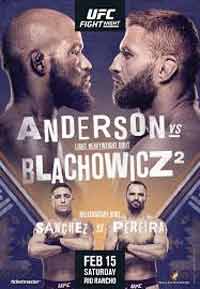 Review by AllTheBestFights.com: 2020-02-15, pretty good finish between John Dodson and Nathaniel Wood but it is not enough to get three stars: it gets two.

The black belt in gaidojutsu and Tuf 14 Bw tournament winner John Dodson entered this fight with a professional record of 20-11-0 (55% finishing rate) and he is ranked as the No.22 bantamweight in the world but he won just one out of his last four fights, against Pedro Munhoz in 2018 (John Dodson vs Pedro Munhoz); after this bout he has lost to Jimmie Rivera (John Dodson vs Jimmie Rivera) and Petr Yan (John Dodson vs Petr Yan).
His opponent, Nathaniel Wood, has a mma record of 16-3-0 (87% finishing rate) and he entered as the No.23 in the same weight class. He was defeated by Alan Philpott in 2016 but since then he has collected eight victories beating Johnny Eduardo, Andre Ewell and Jose Alberto Quinonez in his last three (Nathaniel Wood vs Jose Alberto Quinonez). Dodson vs Wood is on the undercard of Corey Anderson vs Jan Blachowicz 2 – UFC Fight Night 167. Watch the video and rate this fight!