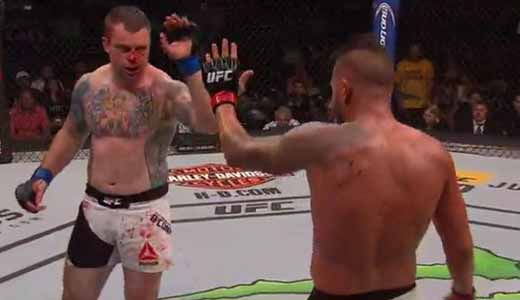 Review by AllTheBestFights.com: 2016-06-18, entertaining and tough fight with some wild exchanges: Steve Bosse vs Sean O’Connell is one of the best mma fights of 2016 and it gets four stars (UFC Fight of the Night).

Sean O’Connell entered this fight with a mma record of 17-7-0 (71% finishing rate) and he is ranked as the No.41 light heavyweight in the world but he comes off the loss against Ilir Latifi.
His opponent, Steve Bosse, has an official record of 11-2-0 (91% finishing rate) and he entered as the No.76 in the same weight class. He lost to Thiago Santos last year (4-stars-fight, Santos vs Bosse) but he came back to win in 2016 defeating James Te Huna (=Te Huna vs Bosse). O’Connell vs Bosse is on the undercard of Rory MacDonald vs Stephen Thompson – UFC Fight Night 89. Watch the video and rate this fight!