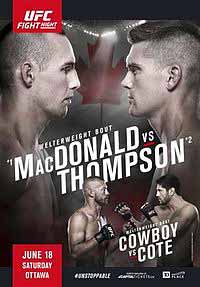 Review by AllTheBestFights.com: 2016-06-18, pretty good fight between Donald Cerrone and Patrick Cote: it gets three stars (UFC Performance of the Night).

The black belt in gaidojutsu Donald Cerrone entered this fight with a pro mma record of 29-7-0 (72% finishing rate) and he is ranked as the No.11 welterweight in the world. He lost to Rafael dos Anjos last year (=dos Anjos vs Cerrone 2) but he came back to win in 2016 against Alex Oliveira (=Cerrone vs Oliveira).
His opponent, the black belt in judo and Brazilian jiu-jitsu Patrick Cote, has a record of 23-9-0 (56% finishing rate) and he entered as the No.21 in the same weight class. He suffered his last defeat when he faced Stephen Thompson in 2014, after this bout he has won three fights beating Ben Saunders in 2016. ‘Cowboy’ Cerrone vs Cote is on the undercard of Rory MacDonald vs Stephen Thompson – UFC Fight Night 89. Watch the video and rate this fight!