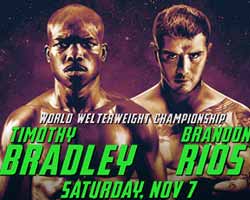 Review by AllTheBestFights.com: 2015-11-07, good pace and nice exchanges from the first bell: Timothy Bradley vs Brandon Rios gets three stars.

The former world champion in two different weight classes Timothy Bradley Jr entered this fight with a professional boxing record of 32-1-1 (12 knockouts) and he is ranked as the No.6 welterweight in the world. He suffered his only loss last year when he faced #1 Manny Pacquiao in their rematch (=Pacquiao vs Bradley 2), after this bout he drew with Diego Gabriel Chaves (=Bradley vs Chaves) and won over Jessie Vargas (=Bradley vs Vargas).
His opponent, the former WBA Lw champion Brandon Rios, has an official record of 33-2-1 (24 knockouts) and he entered as the No.9 in the same weight class. He lost two consecutive fights in 2013, against Mike Alvarado (=Rios vs Alvarado 2) and Manny Pacquiao (=Pacquiao vs Rios), after this bout he came back to win in 2014 with Diego Gabriel Chaves (via disqualification, Rios vs Chaves) and he has taken revenge on Alvarado in 2015 (=Alvarado vs Rios 3). Bradley vs Rios is valid for the WBO World welterweight title. Watch the video and rate this fight!