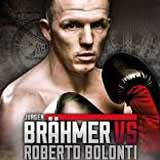 Review: 2014-06-07, fight not so good between Juergen Braehmer and Roberto Bolonti: it gets two stars. Juergen Braehmer entered this fight with a professional boxing record of 43-2-0 (32 knockouts) and he is ranked as the No.5 light heavyweight in the world (currently the #1 in this division is Adonis Stevenson), he suffered his last defeat in 2008 when he faced Hugo Garay, since then he has collected 12 consecutive victories winning the Wba belt against Marcus Oliveira at the end of 2013 (=Braehmer vs Oliveira); Braehmer has already defended the title once in 2014 against Enzo Maccarinelli (=Braehmer vs Maccarinelli).
His opponent, Roberto Feliciano Bolonti, has an official record of 35-2-0 (24 knockouts) and he entered as the No.25 in the same weight class, he suffered his last loss in 2012 facing Tony Bellew in a fight valid for the vacant WBC Silver light-Hw title (=Bellew vs Bolonti); after that bout he has fought and won five times. Braehmer vs Bolonti is valid for the WBA World light heavyweight title (Braehmer’s second defense). Watch the video and rate this fight!