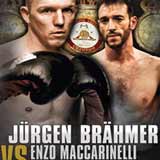 Review: 2014-04-05, pretty good fight between Juergen Braehmer and Enzo Maccarinelli: it gets three stars. Juergen Braehmer entered this fight with a professional boxing record of 42-2-0 (31 knockouts) and he is ranked as the No.9 light heavyweight in the world, he suffered his last defeat in 2008 when he faced Hugo Garay for the WBA light-Hw belt (title that he won in his last fight against Marcus Oliveira: Braehmer vs Oliveira), since then he has collected eleven consecutive wins winning the WBO title in 2009.
His opponent, Enzo Maccarinelli, has an official record of 38-6-0 (30 KOs=79%) and he entered as the No.13 in the same weight class (currently the #1 in this division is Bernard Hopkins). Maccarinelli was the WBO cruiserweight champion from September 2006 to March 2008 when he lost to David Haye; in his last bouts he moved down in weight class to the light heavyweight division losing one out of six fights (he lost the first bout against Ovill McKenzie McKenzie vs Maccarinelli, but then he won the rematch McKenzie vs Maccarinelli 2). Braehmer vs Maccarinelli is valid for the WBA light heavyweight title (Braehmer’s first defense and first light-Hw world title shot for Maccarinelli). Watch the video and rate this fight!