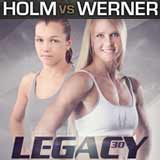 Review: 2014-04-04, the fight between Holly Holm and Juliana Werner gets three stars thanks to a good finish. The undefeated Holly Holm entered this fight with a professional mma record of 6-0-0 (83% ko/tko victory rate – she has never won by submission) and she is ranked as the No.14 women’s bantamweight in the world, she has won boxing world titles in three different weight classes.
Her opponent, Juliana Werner, has an official record of 7-3-0 (57% ko/tko victory rate) and she entered as the No.11 women’s flyweight, she suffered all her three defeats against #2 Vanessa Porto; Wemer comes off five consecutive wins. Holm vs Werner is the main event of Legacy Fc 30. Watch the video and rate this fight!