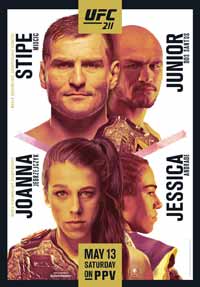 Review by AllTheBestFights.com: 2017-05-13, close fight but not so exciting: David Branch vs Krzysztof Jotko gets two stars.

Krzysztof Jotko entered this fight with a pro record of 19-1-0 (37% finishing rate) and he is ranked as the No.13 middleweight in the world. He suffered his only loss when he faced Magnus Cedenblad in 2014, since then he has won five bouts winning over Brad Scott, Tamdan McCrory and Thales Leites in 2016 (=Leites vs Jotko).
His opponent, the black belt in Bjj, former Wsof light-Hw and Mw champion David Branch, has an official mma record of 20-3-0 (60% finishing rate) and he entered as the No.16 in the same weight class. He suffered his last loss when he faced Anthony Johnson in 2012 (=Johnson vs Branch), since then he has won ten consecutive bouts beating Clifford Starks (=Branch vs Starks), Vinny Magalhaes (=Branch vs Magalhaes) and Louis Taylor in 2016 (=Branch vs Taylor). David Branch vs Krzysztof Jotko is on the undercard of Stipe Miocic vs Junior dos Santos 2 – UFC 211. Watch the video and rate this fight!