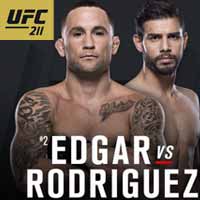 Review by AllTheBestFights.com: 2017-05-13, good fight between Frankie Edgar and Yair Rodriguez: it gets three stars.

The black belt in Brazilian jiu-jitsu and former Ufc Lw champion Frankie Edgar entered this fight with a professional record of 21-5-1 (48% finishing rate) and he is ranked as the No.3 featherweight in the world. He fought twice last year losing to current #1 Fw Jose Aldo (=Edgar vs Aldo 2) and beating Jeremy Stephens (=Edgar vs Stephens).
His opponent, the black belt in tae-kwon-do and Tuf Latin America Fw winner Yair Rodriguez, has a mma record of 10-1-0 (50% finishing rate) and he entered as the No.26 in the same weight class. ‘Pantera’ Rodriguez suffered his only loss when he faced Luis Roberto Herrera in 2012, since then he has won eight consecutive bouts beating Alex Caceres (=Rodriguez vs Caceres) and BJ Penn in his last two (=Rodriguez vs Penn). Frankie Edgar vs Yair Rodriguez is on the undercard of Stipe Miocic vs Junior dos Santos 2 – UFC 211. Watch the video and rate this fight!

(Free embeddable video hosted on Youtube and not uploaded by AllTheBestFights)
https://www.youtube.com/watch?v=XK6C8typ_2g