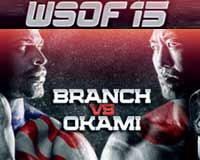 Review: 2014-11-15, pretty good finish between David Branch and Yushin Okami but the rest of the fight was not so exciting: it gets two stars. The black belt in Bjj David Branch entered this fight with a professional mma record of 14-3-0 (57% finishing rate) and he is ranked as the No.18 middleweight in the world, he suffered his last defeat in 2012 when he faced Anthony Johnson (=Johnson vs Branch), since then he has collected four victories winning the WSOF Mw title in his last bout against Jesse Taylor (=Branch vs Taylor).
His opponent, the black belt in judo Yushin Okami, has an official record of 30-8-0 (50% finishing rate) and he entered as the No.14 in the same weight class, he was released from the Ufc in 2013 after losing to Ronaldo ‘Jacare’ Souza (=Okami vs Jacare), after this bout he debuted in the World Series of Fighting beating Svetlozar Savov (=Okami vs Savov). Branch vs Okami, main event of Wsof 15, is valid for the WSOF middleweight title (Branch’s first defense). Watch the video and rate this fight!