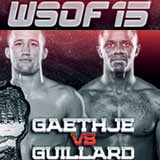 Review: 2014-11-15, nice and tough exchanges between Justin Gaethje and Melvin Guillard: it gets three stars. The undefeated Justin Gaethje entered this fight with a perfect mma record of 12-0-0 (92% finishing rate) and he is ranked as the No.21 lightweight in the world, he has fought twice in 2014 winning the Wsof Lw belt against Richard Patishnock (=Gaethje vs Patishnock) and then he successfully defended it against Nick Newell (=Gaethje vs Newell).
His opponent, Melvin Guillard, has a record of 31-13-2 (72% finishing rate) and he entered as the No.27 in the same weight class, he was released from the Ufc at the beginning of 2014 after losing to Michael Johnson (=Johnson vs Guillard); after this bout he debuted in the World Series of Fighting beating Gesias Cavalcante (=Guillard vs Cavalcante). Gaethje vs Guillard was valid for the WSOF lightweight title but Guillard missed the 155 lbs weight allowance (weighing 158.8 pounds) and the bout was changed to a non-title catchweight fight; undercard of David Branch vs Yushin Okami – WSOF 15. Watch the video and rate this fight!