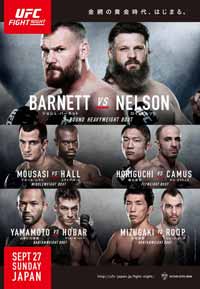 Review by AllTheBestFights.com: 2015-09-26, aggressive start between Diego Brandao and Katsunori Kikuno but it is not enough to get three stars, it gets two (UFC Performance of the Night).

The black belt in Bjj and Tuf 14 winner Diego Brandao entered this fight with a professional mma record of 19-10-0 (79% finishing rate) and he is ranked as the No.39 featherweight in the world while his opponent, the black belt in karate and judo Katsunori Kikuno, has an official record of 22-7-2 (64% finishing rate) and he entered as the No.83 in the same weight class. Brandao vs Kikuno is on the undercard of Josh Barnett vs Roy Nelson – UFC Fight Night 75. Watch the video and rate this fight!