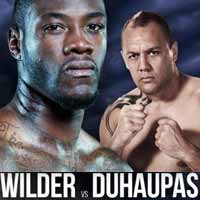 Review by AllTheBestFights.com: 2015-09-26, nice and tough fight between Deontay Wilder and Johann Duhaupas: it gets three stars.

The undefeated Deontay Wilder entered this fight with a perfect boxing record of 34-0-0 (33 KOs=97%) and he is ranked as the No.4 heayweight in the world (currently the #1 in this division is Wladimir Klitschko). He has already fought twice in 2015 beating Bermane Stiverne (=Stiverne vs Wilder) and Eric Molina (=Wilder vs Molina).
His opponent, Johann Duhaupas, has an official record of 32-2-0 (20 knockouts) and he entered as the No.34 in the same weight class. He has also fought twice this year losing to Erkan Teper (=Teper vs Duhaupas) and winning over Manuel Charr (=Charr vs Duhaupas). Wilder vs Duhaupas is valid for the WBC World heavyweight title (Wilder’s second defense). Watch the video and rate this fight!