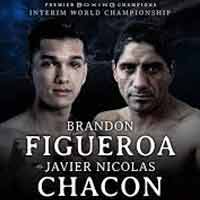 Review by AllTheBestFights.com: 2019-08-24, some good exchanges between Brandon Figueroa and Javier Chacon but it is not enough to get three stars: it gets two.

The undefeated Brandon Figueroa entered this fight with a perfect record of 19-0-0 (14 knockouts) and he is ranked as the No.17 super bantamweight in the world. In his last three fights he has won over Oscar Escandon (Oscar Escandon vs Brandon Figueroa), Moises Flores (Brandon Figueroa vs Moises Flores) and Yonfrez Parejo (Brandon Figueroa vs Yonfrez Parejo).
His opponent, Javier Nicolas Chacon, has an official boxing record of 29-4-1 (9 knockouts) and he entered as the No.16 in the same weight class. He lost to Isaac Dogboe in 2017 but then he has won four bouts defeating Luis Emanuel Cusolito and Diego Herminio Alejandro Sananco in 2019. Figueroa vs Chacon is valid for the interim WBA World super bantamweight title. Watch the video and rate this fight!