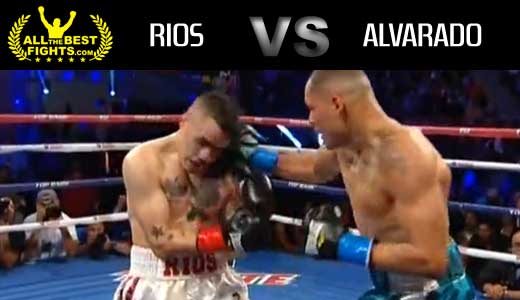 Review: 2012-10-13, amazing toe-to-toe fight from the first bell, Brandon Rios vs Mike Alvarado has been a very tough battle with an astonishing performance by both fighters: Compubox punching statistics showed that Rios threw, on average, almost 80 punches per round (30% accuracy rate) compared to Alvarado who threw more than 110 punches per round (22% accuracy rate); Rios vs Alvarado is a candidate for Fight of the Year 2012, five stars! Both undefeated, Brandon Rios (30-0-1) entered as the No.5 light welterweight in the world while Mike Alvarado (33-0-0) entered as the No.7. Rios vs Alvarado is valid for the vacant WBO Latino light welterweight title; undercard of Nonito Donaire vs Toshiaki Nishioka. They also faced each other a second time, on March 30, 2013 (=Rios vs Alvarado II) and a third time on January 24, 2015 (=Alvarado vs Rios III). Watch the video!