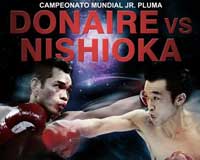 Review: 2012-10-13, fight not particularly exciting with only a great sixth round and a good ninth: Nonito Donaire vs Toshiaki Nishioka gets two stars; don’t waste time searching or watching the full fight video, hightlights is enough. Nonito Donaire ranked as the No.1 super bantamweight in the world, entered the fight with a record of 29-1-0 while Toshiaki Nishioka had a record of 39-4-3 (Nishioka is not ranked as he hasn’t fought since Ocotber 1st, 2011 when he defeated Rafael Marquez). Donaire vs Nishioka is valid for the WBO super bantamweight title. Watch the video!