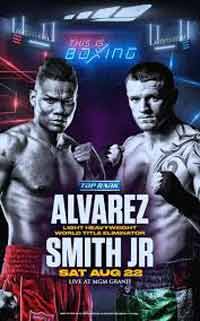 Review by AllTheBestFights.com: 2020-08-22, some good exchanges between Rob Brant and Vitalii Kopylenko but it is not enough to get three stars: it gets two.
The former Wba Mw champion Rob Brant entered this fight with a professional boxing record of 25-2-0 (17 knockouts) and he is ranked as the No.12 middleweight in the world but he comes off the loss against Ryota Murata in their rematch (Rob Brant vs Ryota Murata 2); before this bout he had beat Khasan Baysangurov in February 2019 (Rob Brant vs Khasan Baysangurov) and had defeated Murata in October 2018 (in their first fight, Ryota Murata vs Rob Brant I).
His opponent, Vitalii Kopylenko, has an official record of 28-2-0 (16 knockouts) and he entered as the No.88 in the same weight class. In his last three fights he has won over Jonathan Batista and Jean Carlos Rodriguez but then he has lost to Steven Butler. Kopylenko vs Brant is on the undercard of Eleider Alvarez vs Joe Smith Jr. Watch the video and rate this fight!