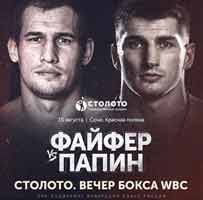 Review by AllTheBestFights.com: 2020-08-22, good exchanges between Ruslan Fayfer and Aleksei Papin: it gets three stars.
Ruslan Fayfer entered this fight with a pro boxing record of 25-1-0 (16 knockouts) and he is ranked as the No.15 cruiserweight in the world. He suffered his only loss when he faced Andrew Tabiti in 2018 (Andrew Tabiti vs Ruslan Fayfer), after this bout he has beat Serhiy Radchenko and Yury Kashinsky (Yury Kashinsky vs Ruslan Fayfer).
His opponent, the former Wako-Pro kickboxing world champion Aleksei Papin, has a record of 11-1-0 (10 KOs=91%) and he entered as the No.11 in the same weight class but he comes off his first and only loss, suffered against Ilunga Makabu last year (via majority decision, Ilunga Makabu vs Aleksei Papin); before this bout he had beat Alexandru Jur, Willbeforce Shihepo and Ismayl Sillah. Papin vs Fayfer, Wbc cruiserweight eliminator, is the main event of the evening. Watch the video and rate this fight!