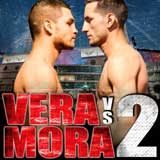 Review: 2012-08-11, high pace and great performance by both fighters: Brian Vera vs Sergio Mora 2 gets three stars. Brian Vera (20-6-0) entered as the No.27 middleweight in the world while Sergio Mora (23-2-2) entered as the No.29. In their first fight Vera defeated Mora by split decision (February 4, 2011); Vera vs Mora 2 is valid for the vacant WBO NABO middleweight title. Watch the video!