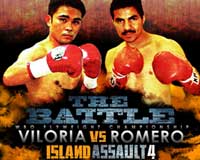 Review: 2012-05-13, good fourth and fifth rounds between Brian Viloria and Omar Nino Romero but it is not enough to get three stars (fight ended by TKO in the ninth round). Brian Viloria (30-3-0) entered as the No.1 flyweight in the world while Omar Nino Romero (31-4-2) entered as the No.20. Viloria vs Romero 3 is valid for the WBO flyweight title (Viloria’s second defense); in their first fight Romero defeated Viloria by unanimous decision (August 10, 2006) while their second fight ended by No-Contest. Watch the video!