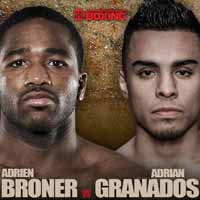 Review by AllTheBestFights.com: 2017-02-18, pretty good fight between Adrien Broner and Adrian Granados: it gets three stars.

The former world champion in four different weight classes Adrien Broner entered this fight with a boxing record of 32-2-0 (24 KOs=75%) and he is ranked as the No.10 welterweight in the world (currently the #1 in this division is Manny Pacquiao). He lost to Shawn Porter in 2015 (=Broner vs Porter) but then he has won over Khabib Allakhverdiev (=Broner vs Allakhverdiev) and Ashley Theophane (=Broner vs Theophane).
His opponent, Adrian Granados, has an official record of 18-4-2 (12 knockouts) and he entered as the No.21 in the same weight class. He suffered two consecutive losses between 2014 and 2015, against Felix Diaz and Brad Solomon, but then he has won five bouts. Adrien Broner vs Adrian Granados is the main event of the evening. Watch the video and rate this fight!