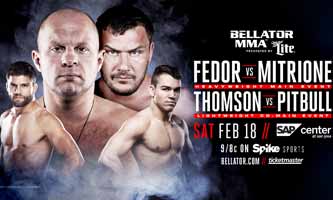 Review by AllTheBestFights.com: 2017-02-18, Josh Thomson vs Patricky Freire gets three stars only thanks to a good finish.

The black belt in Brazilian jiu-jitsu and former Strikeforce Lw champion Josh Thomson entered this fight with a mma record of 22-8-0 (73% finishing rate) and he is ranked as the No.31 lightweight in the world. He lost three consecutive bouts between 2014 and 2015, the last one against Tony Ferguson (=Thomson vs Ferguson), but then he has won over Mike Bronzoulis (=Thomson vs Bronzoulis) and Pablo Villaseca (=Thomson vs Villaseca).
His opponent, Patricky Freire (black belt in Bjj as well), has an official record of 16-8-0 (69% finishing rate) and he entered as the No.40 in the same weight class. ‘Pitbull’ fought three times last year winning over Ryan Couture (=Freire vs Couture) and Kevin Souza (=Freire vs Souza) but then he lost to Michael Chandler (=Chandler vs Freire 2). Patricky Freire vs Josh Thomson is the main event of Bellator 172 (on the original fight card the main event was Fedor Emelianenko vs Matt Mitrione but the American has forced to withdraw from the bout due to ill health). Watch the video and rate this fight!