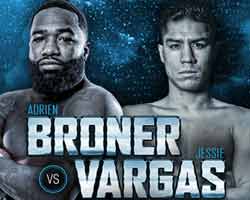 Review by AllTheBestFights.com: 2018-04-21, great performance by both boxers: Adrien Broner vs Jessie Vargas gets three stars.

The former world champion in four different weight classes Adrien Broner entered this fight with a pro boxing record of 33-3-0 (24 knockouts) and he is ranked as the No.6 super lightweight in the world. ‘The Problem’ AB fought twice last year beating Adrian Granados (Adrien Broner vs Adrian Granados) and losing to Mikey Garcia (Mikey Garcia vs Adrien Broner).
His opponent, the former world champion in two different weight classes Jessie Vargas (who replaces Omar Figueroa Jr), has a record of 28-2-0 (10 knockouts) and he entered as the No.6 welterweight. He lost to Manny Pacquiao in 2016 (Pacquiao vs Vargas) but he came back to win in 2017 with Aaron Herrera (Jessie Vargas vs Aaron Herrera). Broner vs Vargas is the main event of the evening. Watch the video and rate this fight!