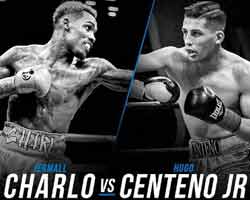 Review by AllTheBestFights.com: 2018-04-21, pretty good finish between Jermall Charlo and Hugo Centeno Jr but it is not enough to get three stars: it gets two.

The undefeated former Ibf super-Ww champion Jermall Charlo entered this fight with a perfect record of 26-0-0 (20 KOs=77%) and he is ranked as the No.4 middleweight in the world (currently the #1 in this division is Gennady Golovkin). In his last three fights he has won over Austin Trout (Charlo vs Trout), Julian Williams (Charlo vs Williams) and Jorge Sebastian Heiland (Jermall Charlo vs Jorge Sebastian Heiland).
His opponent, Hugo Centeno Jr, has a boxing record of 26-1-0 (14 knockouts) and he entered as the No.11 in the same weight class. He suffered his only loss when he faced Maciej Sulecki in 2016 (Sulecki vs Centeno), after this bout he has beat Ronald Montes and Immanuwel Aleem (Immanuwel Aleem vs Hugo Centeno Jr). Charlo vs Centeno is valid for the interim WBC World middleweight title; undercard of Adrien Broner vs Jessie Vargas. Watch the video and rate this fight!