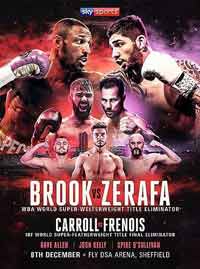 Review by AllTheBestFights.com: 2018-12-08, fight not particularly good between Kell Brook and Michael Zerafa: it gets two stars.

The former Ibf Ww champion Kell Brook entered this fight with a professional boxing record of 37-2-0 (26 knockouts) and he is ranked as the No.6 super welterweight in the world (currently the #1 in this division is Jarrett Hurd). He lost two consecutive fights between 2016 and 2017, against Gennady Golovkin (4-stars fight, Golovkin vs Brook) and Errol Spence Jr (Kell Brook vs Errol Spence Jr) but he came back to win in 2018 with Sergey Rabchenko (Kell Brook vs Sergey Rabchenko).
His opponent, Michael Zerafa, has an official record of 25-2-0 (14 knockouts) and he entered as the No.29 in the same weight class. He was defeated by Peter Quillin 2015 (Peter Quillin vs Michael Zerafa) but since then he has won eight consecutive bouts beating Jose Agustin Feria in his last one. Brook vs Zerafa, final eliminator for the WBA Super welterweight title, is the main event of the evening. Watch the video and rate this fight!