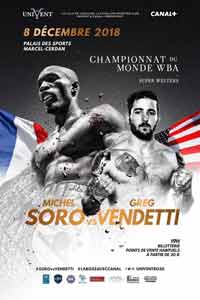 Review by AllTheBestFights.com: 2018-12-08, pretty good finish between Michel Soro and Greg Vendetti: it gets three stars.

Michel Soro entered this fight with a boxing record of 32-2-1 (21 knockouts) and he is ranked as the No.10 super welterweight in the world (currently the #1 in this division is Jarrett Hurd). He lost to Brian Carlos Castano last year (via split decision, Soro vs Castano) but then he has won over Ivan Montero (Michel Soro vs Ivan Montero) and John Vera (Michel Soro vs John Vera).
His opponent, Greg Vendetti, has an official record of 20-2-1 (12 knockouts) and he entered as the No.36 in the same weight class. He suffered two consecutive losses between 2013 and 2014, against Antonio Chaves Fernandez and Pedro Gonzalez, but since then he has collected 16 victories defeating Yoshihiro Kamegai in his last one. Soro vs Vendetti is valid for the interim WBA World super welterweight title. Watch the video and rate this fight!