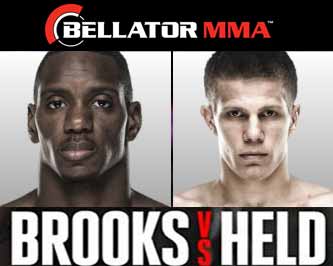 Review by AllTheBestFights.com: 2015-11-06, disappointing fight between Will Brooks and Marcin Held: it gets two stars.

Will Brooks entered this fight with a pro mma record of 16-1-0 (56% finishing rate) and he is ranked as the No.4 lightweight in the world (currently the #1 in this division is Rafael dos Anjos). He suffered his only defeat in 2013 when he faced Saad Awad (=Brooks vs Awad), after this bout he has won seven consecutive fights winning the vacant Bellator Lw belt last year, against Michael Chandler (=Brooks vs Chandler II), and defending it once in 2015 with Dave Jansen (=Brooks vs Jansen).
His opponent, the black belt in Bjj Marcin Held, has a record of 21-3-0 (76% finishing rate) and he entered as the No.15 in the same weight class. He lost to Dave Jansen in 2013 (=Jansen vs Held) but then he has won six bouts defeating Patricky Freire in the final of the Bellator Lw tournament (season ten) (=Freire vs Held) and beating Alexander Sarnavskiy in 2015 (=Held vs Sarnavskiy). Brooks vs Held is valid for the Bellator lightweight title (Brooks’ second defense); undercard of Patricio Freire vs Daniel Straus 3 – Bellator 145. Watch the video and rate this fight!

Brooks’ next fight: Will Brooks vs Ross Pearson