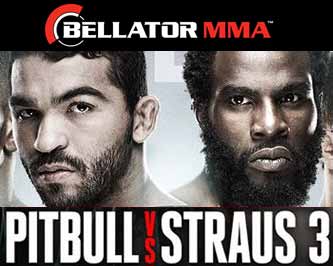 Review by AllTheBestFights.com: 2015-11-06, some good exchanges in the last part of the fight but it is not enough to get three stars: Patricio Freire vs Daniel Straus 3 gets two.

The black belt in Brazilian jiu-jitsu Patricio Freire entered this fight with a professional mma record of 24-2-0 (75% finishing rate) and he is ranked as the No.4 featherweight in the world (currently the #1 in this division is Jose Aldo). Patricio ‘Pitbull’ suffered his last loss in 2013 when he faced Pat Curran (via split decision, Curran vs Freire), since then he has won seven consecutive bouts taking revenge on Curran last year in a fight valid for the Bellator Fw title (=Curran vs Freire 2) and defending his belt twice, the last time against Daniel Weichel (=Freire vs Weichel).
His opponent, the former bellator fw champion Daniel Straus, has an official record of 23-6-0 (43% finishing rate) and he entered as the No.14 in the same weight class. He lost both the first and the second fight with Freire (Freire vs Straus I in 2011 and Freire vs Straus II in 2015), but after the second one he came back to win beating Henry Corrales (=Straus vs Corrales). ‘Pitbull’ Freire vs Straus 3, main event of Bellator 145, is valid for the Bellator featherweight title (Freire’s third defense). Watch the video and rate this fight!